Installing a fireplace can be a daunting task, even when you know what you’re doing. The installation involves many aspects from different trades.

If you’ve ever thought about having a new fireplace installed, but you have doubts about being able to do it yourself, you’ll need to call a chimney contractor to help you out.

This post will help you see some of the most common errors made by even the most experienced chimney professionals.

One of the first things to choose when you install a new fireplace is the type of appliance you want to install.

If you’re choosing a gas fireplace, there is a long list of the different valve and burner systems to choose from, such as millivolt and electronic gas valve systems.

While they both perform the same basic task, they are completely different operationally.

A millivolt valve system, which is also called a standing pilot system, is a type of valve that uses a pilot assembly with a small standing flame that burns all the time.

A gas valve contains small electromagnets that hold open springs within the valve that allow gas to flow to the pilot and burner circuits.

When manually lit, the pilot flame from the gas valve will heat a device called a thermocouple, and using resistance between dissimilar metals within the thermocouple, a small amount of voltage is created to power the magnets in the valve.

Unlike electronic gas valve systems, which requires a 120-volt power source, the millivolt system requires no outside voltage supply to operate.

The pilot flame generates all the power that is required.

We’ve seen an increasing interest in electronic systems that save gas by eliminating the standing pilot. I think it has to do with an interest in efficiency and conservation.

However, the number of units with a standing pilot is way more than the electronic systems and is often assumed by contractors unfamiliar with models of fireplace that a 120-volt power supply is required.

What you’ll get is a contractor that improperly connects a power lead to the terminal block.

When energized, this can cause a dangerous charge to pass through the valve, damaging the valve, the pilot assembly, and other components linked to the valve.

To prevent situations like this, you should work with a contractor that is willing to work closely with you to pick a fireplace model. That way you and the contractor are fully aware of what’s required to get it going safely.

When adding a fireplace to your house, you’ll likely need to make some structural modifications to accommodate the vent pipe from a wood or gas burning fireplace.

You need to allow enough clearance between your new vent pipe and the framing so that you can be sure the wood framing doesn’t get hot from contact heat, which could cause a serious house fire.

It’s often mistaken by installers that think fireplace venting can be treated like normal HVAC ducting, with direct contact with wood framing being acceptable.

We see this a lot more when the venting was installed as part of a larger project, like a remodel.

Luckily, it can be fixed in almost all cases, even if it’s discovered after framing has been completed. 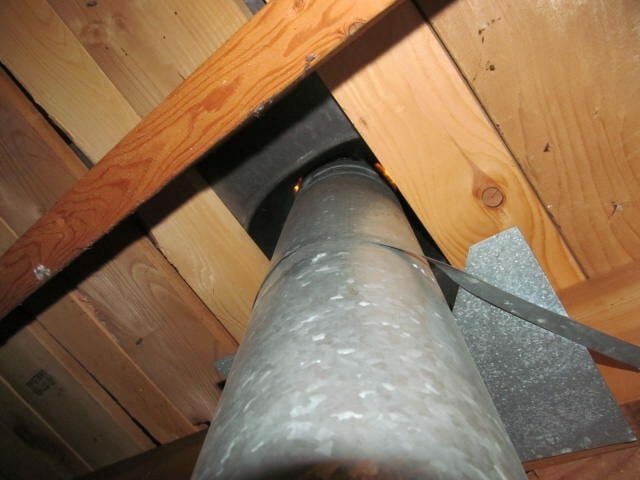 As homes become more efficient, you’ll see an increased use of insulation and sealing the home tightly so that outdoor temperature swings have minimal effect.

A huge part of fireplace safety, just like in the previous section, is maintaining clearances to combustibles and insulating the unit can be tricky.

Most fireplaces will have a standoff system that is screwed or welded to the fireplace chassis and will be concealed in the wall once the surface is finished.

The standoffs are there to guide you when framing the fireplace into the wall enclosure that will house it, with a top plate running along the top of the standoffs.

You might think that it’s actually a good idea to insulate all gaps that result between the standoffs and the top of the fireplace, it’s actually dangerous and can cause your fireplace to retain too much heat.

This will cause the paper backing on insulation to ignite and could cause a house fire.

The best practice to ensure energy efficiency is to properly insulate the walls around and above the fireplace, but not directly insulating the fireplace itself.

The insulation in the walls and ceiling need to be thoroughly secured with staples or metal strapping to prevent it from falling against the fireplace.

A large part of a successful gas fireplace installation is the selection of the proper vent pipe to route the exhaust gases to the atmosphere.

Every unit will have a list of approved venting components that have been tested with the appliance and deemed safe. 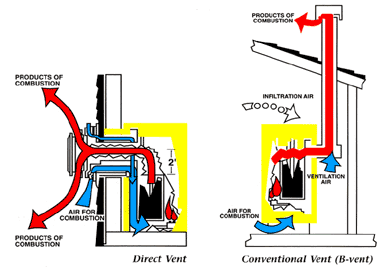 A B-vent gas fireplace will draw combustion air from the room, similar to a traditional wood-burning fireplace.

Exhaust gases are vented to the atmosphere by way of a two-ply vent pipe, known as Type B venting.

This is the same venting used for many gas furnaces and water heaters. They aren’t very efficient, so B vent isn’t as popular as they used to be.

Direct vent fireplaces will use a pane of tempered or ceramic glass to seal the combustion chamber from the room.

To allow the fireplace to receive air for combustion, a double-walled vent pipe will be used.

The inner tube will vent the exhaust to the atmosphere, while the outer tube will pull combustion air from outside.

The outer tube will keep the entire vent system cool by covering the inner exhaust tube.

The problem that you’ll get when using incorrect venting is that, even though the gases should still exhaust, it doesn’t allow the unit to draw the combustion air it needs.

The unit will only be able to pull the available air in the fireplace before it will begin starving for oxygen.

This is very common, due to the simple misunderstanding that all gas fireplaces use the same vent pipe.

It’s important to only use the approved vent pipe listed in the manual.

A final issue that we see is the improper use of combustible finishing materials in relation to the metal face of the fireplace.

While the metal standoffs that I mentioned before are responsible for maintaining clearances to framing, there are no spacers around the metal facade of the unit.

Manufacturers usually include a chart in the owner’s manual that outlines safe clearance to combustible finishing materials.

Paper faced drywall should never be used as a finisher. The metal face of the unit will become hot in operation and the paper facing drywall can discolor and even combust.

You should only use non-combustible material such as a cement board and tile that has a smooth face with no louvers or vents.

Any unit with a louvered face must always have its louvers uncovered unless the manufacturer says otherwise.

How to Hire a Fireplace Company

Working with a professional chimney contractor is the best way to ensure that your room addition or remodel is completed properly and on time.

The years of experience with various trades will be invaluable. When it comes to the intricacies of fireplace installation, I highly recommend you find a CSIA certified chimney pro to help out.

Hiring anyone to come into your home to install a fireplace involving fire shouldn’t be a task you take lightly. So I created a list that you can use to make sure you make the right decision when you need someone to help you in your home. 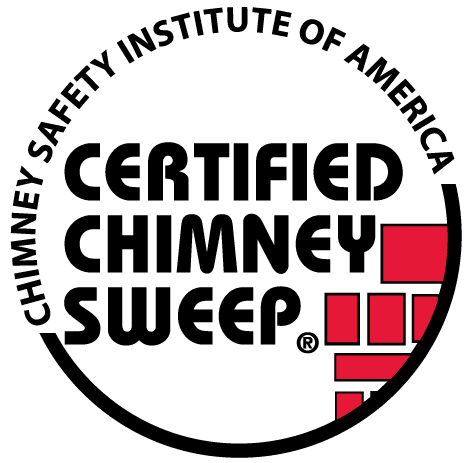