As the weather gets colder in the Roanoke Valley, we can begin to notice our heating bill increasing.

Your heater is working double time trying to keep up with the changing temperatures. Not because it’s cold outside, though.

But because of the concepts of house stack effect and wind loading.

This post aims to help explain what wind loading and the stack effect are and how you can keep them from causing any problems. 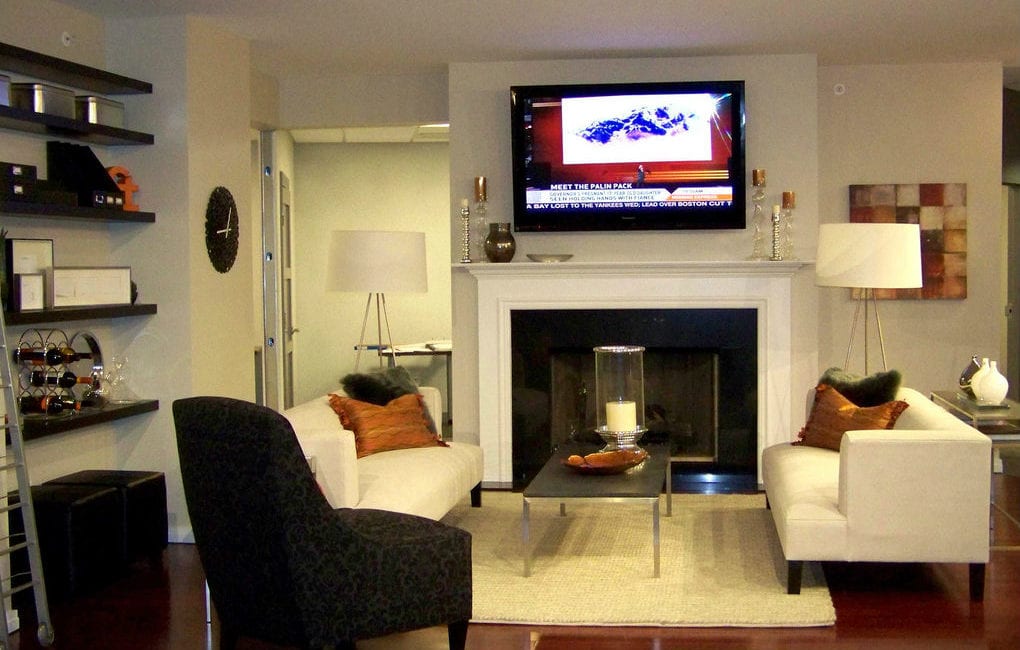 How to Avoid Issues with Stack Effect?

To be sure that you’re not going to have as many issues with the effect, you really need to start looking at your chimney and making sure you have it set up properly.

Your chimney’s main function is to produce the draft that pulls combustion air into the appliance and safely exhausts the combustion gases to the outside. A good chimney needs to do much more than that.

Your chimney should ideally be installed within the house, rather than up an outside wall.

When chimneys run up outside walls, they’re exposed to the cold outside. Makes sense, right? When that happens, the chilling effect can reduce the available draft at the firebox or appliance.

Chimneys that run up through the house are enclosed within the warm environment and will produce a stronger draft and accumulate fewer creosote deposits.

Chimneys installed inside perform far better than outside chimneys too.

A good rule of thumb for the minimum height of your chimney is that the total system height, from the floor of hte appliance to the top of the chimney, should never be less than 15 feet.

Most installations will exceed this height. But sometimes, small houses with short roofs may not.

Most draft problems have to do with the inadequate gas temperature in your chimney.

In addition to how tall your chimney needs to be, you need to be aware of how far your chimney penetrates above your roof.

The top of your chimney should not extend less than 3 feet from the point it exits the roof. It also needs to be at least 2 feet taller than any roof, building, or other obstacle within a horizontal distance of 10 feet.

The chimney flue should be the same size as the appliance flue collar. Chimneys that are over-sized for the appliance they serve are common because people think that bigger is better.

It’s not the case here.

Bigger is not better when it comes to chimney sizing.

Flue gases flow faster and has less time to lose heat in a small chimney flue than in a large one.

This is what you need because if the smoke and gases have a longer time to hang out in the chimney, you’re more likely to have creosote problems since residence time is a huge contributing factor to creosote build up.

Before we can get into the bulk of determining what the stack effect and wind loading are, we need to dive into knowing what the neutral pressure plane is.

In cold weather, the buoyancy of the warm air causes a slight pressure difference between the highest and the lowest points in your house.

The pressure high in the house is positive, while the pressure in the lower parts of your house is negative. 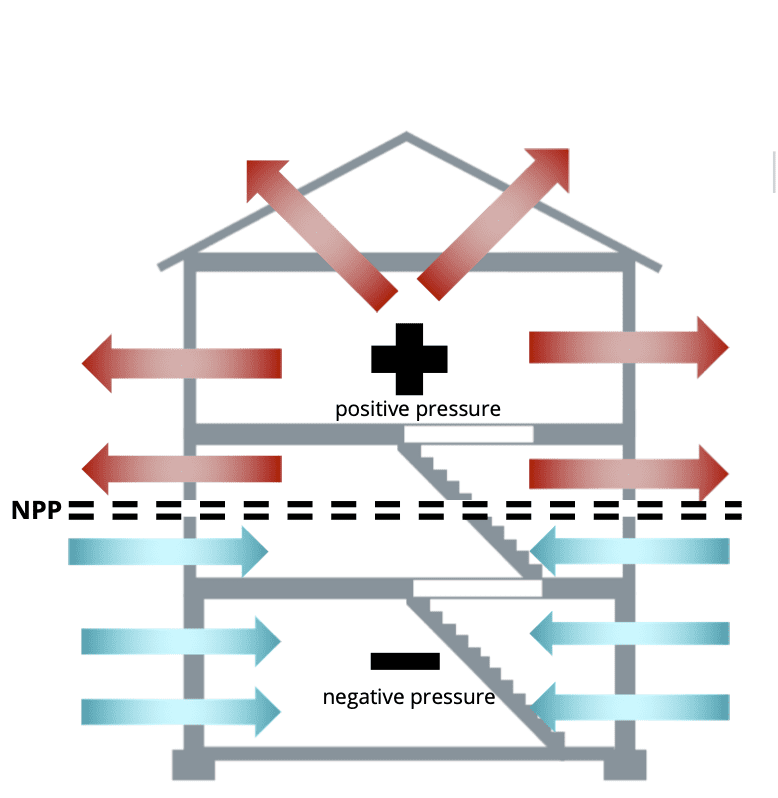 What Is House Stack Effect?

You’re familiar with the stack effect, even if you didn’t know it.

Hot air rises. But it goes deeper than that.

As heat escapes up your chimney or through your roof by way of tiny holes, cold air is sucked in through your basement and first-floor windows.

So it’s not so much that hot air rises.

Hot air is just pushed up and out by the cold air that is coming in. Rude, right?

The stack effect, like wind, can move very large volumes of air through a tiny opening. In the winter, the hot air in a heated building is less dense than the cold air outside. When the warm air rises, it leaves behind cold air at the bottom.

The neutral pressure plane rises and falls because of atmospheric conditions such as wind and temperature.

The stack effect is creating a battle between cold outside air and the warm air inside your home. The stack effect can be responsible for smoke entering your home and even for difficulties getting your fire started in your fireplace.

And since the neutral pressure plane also moves toward the area of most leakage, you’re likely to experience a significant loss of heat, where you’ll end up paying more to heat your home than you do to cool it down in the summer. 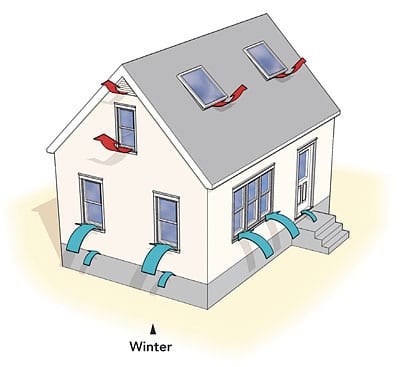 How is my Chimney Affected?

Cold air leaking into your home not only impacts the heating bill but also impacts the air pressure balance in your house.

It turns out your chimney is one of the main areas where you’ll get a leak.

The cold air entering your home makes the stack effect strong enough to force a cold backdraft in a chimney that is cooler than room temperature and creating negative air pressure.

Plus, attempting to light a fire in a chimney with a backdraft is sure to make you frustrated. First, you won’t have good luck lighting the fire.

And if you do get a fire going, you’ll probably get smoke entering the room where the fireplace is located.

Is Your House a Better Chimney Than Your Chimney?

This is certainly a funny concept, but it’s definitely not out of question.

This creates a draft in the system.

During winter, when it’s cold outside, your house also becomes an enclosed column of warm, buoyant air. Therefore, creating it’s own version of a draft.

The warm air pushes up towards the top of the house, creating higher air pressure there.

At the same time, the pressure in your basement or ground level has lower pressure than the outside. That’s why the basement always feels “drafty” and colder than everywhere else.

Some houses make better chimneys than others. Two story houses produce more stack effect than ranch style houses because the column is taller.

A house with a lot of leaks at the top of the house will produce more stack effect because the leaks offer a ready path for the warm air to escape, similar to the opening of a chimney.

Luckily good chimneys that are insulated and run inside the house are not affected by the stack effect.

If there’s leakage in the home, and it’s equal all throughout, this will not effect the natural draft appliances.

However, if openings ot the downwind side are larger, or someone opens a door or window downwind, you’ll see large quantities of air that’s drawn from the house.

This will also increase the level of negative pressure in the home and will cause natural draft appliances (fireplaces, wood stoves, furnaces) to backdraft.

If you think about it, air is fluid. And it has weight.

So when it gets moving it exerts pressure on anything that gets in the way. If you have experienced 50-mile per hour wind, you’ll know all about the pressure wind can bring.

Air flows in eddies and currents when it gets turbulent, as it does flowing around obstacles, like water. Since air is invisible, it makes diagnosing wind-induced venting failure mostly guesswork.

But we have some science to apply to the whole thing.

The higher the velocity of a stream of air, the lower the pressure that it exerts on the surface it is flowing over. This principle gives an airplane wing the lift.

Wind flowing over the top of a chimney can increase draft by producing a driving pressure that assists in pulling the gasses out of the chimney.

Despite this, you can’t depend on wind for your appliance’s performance. Wind is unpredictable, no matter how much the weather channel tries.

The only dependable driving pressure in a chimney system is produced by the temperature difference.

A chimney with no cap is the most vulnerable to wind. A cap doesn’t just protect from water dripping down or keeping animals out of the flue.

It also helps provide protection from the adverse effects of wind. Caps with baffles can actually improve the draft regardless of the wind direction. 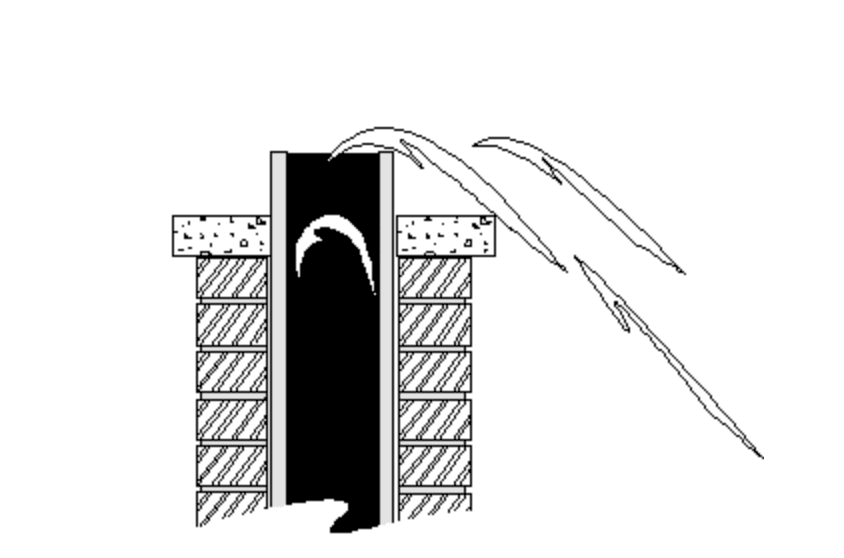 As I mentioned before, cold weather causes the buoyancy of the warm air to cause a slight pressure difference between the highest and lowest points. The area in between with neutral, calm pressure is the neutral pressure point.

The force of wind blowing around the house produces a positive pressure zone on the windward side and a negative on the downwind side.

The effect of wind on the pressures around and inside a building are complex and certainly unpredictable.

The leakier the building, like with old homes, the more pronounced and immediate the effect is on the pressures inside your home.

Building codes call for the chimney to be three feet higher thank the highest point on your roof to help combat the effects of wind and pressure in your home.

Although the effects of wind are unpredictable, you should be aware that chimney systems of good design are highly resistant to wind-induced venting failure.

A chimney that is installed in your home that penetrates your roof near the peak and has a baffled cap will not be negatively affected by the wind.

Schedule an Inspection with a Certified Chimney Tech

If this is confusing, and you’re having drafting problems, give your local chimney company a call.

The technician will look at your chimney and ensure that the chimney is up to code and capable of drafting properly.

During your service, you can expect your technician to inspect your chimney with a video camera so we can give a full top-to-bottom, inside out inspection.