What is a Class A Chimney?

Trying to figure out what kind of pipe you need to install for your fireplace, stove, or any other venting hearth appliance can be a daunting task.

The pipe needs to be a specific size in order to exhaust properly. You can’t mix different brands or metals or sizes. Plus, you need to make sure the pipe is fit for the type of fuel you’ll use.

There are plenty of other rules like these that contribute to the difficulty in buying chimney pipes. Today’s post will help you become a bit more familiar with chimney pipes.

Before we get started, you’ll need to begin by consulting the owner’s manual for your appliance. Different fireplaces and stoves will have varying requirements.

These requirements are more than just the kind of pipe you’ll need.

It also includes specific information about clearances and offsets that you need to follow for safe and proper installation.

Before we get started, you’ll need to begin by consulting the owner’s manual for your appliance. Different fireplaces and stoves will have varying requirements.

These requirements are more than just the kind of pipe you’ll need.

It also includes specific information about clearances and offsets that you need to follow for safe and proper installation.

Class A pipe is used to vent high-temperature exhaust released from wood, coal, and oil-burning appliances, such as fireplaces, stoves, boilers, and furnaces.

Not every venting system requires a Class A pipe, but it’s absolutely necessary for use with all wood-burning fireplaces and stoves.

Class A chimney pipe is UL-Listed, which permits its use with a range of different vent pipe manufactured by other fabricators and an even wider variety of fireplace, stoves, inserts, and furnaces.

However, it’s important to know that you should never mix and match different brands of Class A chimney pipes within a single chimney system (unless allowed by the manufacturer).

The different brands of pipe are all distinctly engineered and must be used as a complete system from beginning to end.

If you’re looking to extend or redesign your chimney system, you’ll need to know the make and model of your existing Class A pipe and buy the same type, if possible.

Unfortunately, if your current make and model is discontinued, you’ll ned to rebuild your chimney system from scratch.

Building codes prohibit the use of any adapters not approved by the manufacturer. These adapters are very rare and usually only offered by a manufacturer to link a very similar piping system to a currently offered system.

There are two types of Class A chimney pipe – solid-packed and air-cooled chimney.

These pipes have a smaller inner diameter (usually between 5-8 inches) that have some insulation, either double-wall or triple-wall.

These pipes contain fiberglass or ceramic insulation to stay cooler on the outside and needs to maintain a 2-inch clearance to combustibles.

These pipes have larger inner diameters (usually between 8-24 inches) and no insulation.

These pipes rely on the air circulating within them to keep the outer wall cooler and needs to maintain a 1 or 2-inch clearance to combustibles.

When using a Class A chimney pipe, it’s important to plan or route the vent run wiselly to keep your costs ata minimum.

Class A pipe is usually manufactured with either stainless steel or galvanized outer walls.

When running CLass A pipe within a masonry chimney, a chase, an attic, or any enclosure inside your home, it’s economically wise to use a galvanized pipe.

It’s highly recommended if at all possible, to install your chimney in the interior of your home.

Having your chimney system exposed to the outdoors brings with it the risk of a cold hearth syndrome, which can hinder drafting and produce more creosote.

You’ll need stainless steel if your pipe will be exposed to the elements.

If the pipe is galvanized and exposed, it will be susceptible to eventual rust and corrosion. This is especially true in coastal areas.

If you must use a galvanized pipe, I recommend you paint your pipe with a high temperature, rust resistant paint to “trick” the pipe to last longer.

Class A chimney pipes have their own specialized caps that fit right on top of the pipe at the point of termination above the roofline.

When terminating a class A system, you need to follow the 10-3-2 rule.

This means that the termination needs to be 2 feet higher than any portion of the building within a 10-foot horizontal distance, as well as 3 feet above the roof.

Here’s what the National Fire Protection Association says about it:

“A chimney for residential-type or low-heat gas utilization equipment appliances shall extend at least 3 ft (0.9 m) above the highest point where it passes through a roof of a building and at least 2 ft (0.6 m) higher than any portion of a building within a horizontal distance of 10 ft (3 m)” (NFPA ANSI Z223.1, Section 10.5.2.1).

Please know, this code must be met with the 10-foot radius, clear of any obstruction at the top of your pipe before your cap is installed.

This rule is in place to ensure proper draft for your unit. 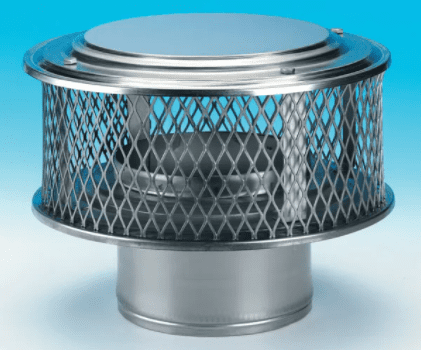 How to Hire a Chimney Contractor

When you’re ready, you should schedule a time for a certified chimney expert to go to your home to take a look at the area you want your new class A chimney installed.

Hiring anyone to come into your home to install a heat source involving fire shouldn’t be a task you take lightly. So I created a list that you can use to make sure you make the right decision when you need someone to help you in your home.

Please note that If you are hiring a chimney company to install a cap for you, most of the time, they will need to buy the cap themselves. This is primarily for liability and insurance purposes.

When you’re shopping for a new fireplace and need a class A chimney installed, now you’ll know exactly what you need to look for.

But if you have any questions, feel free to reach out and we’ll be happy to help you figure out the best plan of action.

It doesn’t matter if you are in Roanoke, Lynchburg, Blacksburg, or some other city anywhere in the USA — if you have any questions, please don’t hesitate to email me at mitchell@patriotchimney.net or call me at 540-225-2626.

If you’d like to get started with the process of having Patriot Chimney install your new Class A chimney, fill out the form below and someone from our office will call you in no time!